Our employees generate $5.4 M in regional income & support 67 jobs in the regional economy
Get news & information on Workforce Development // Sign me up

Every once in a while a report or study emerges that helps validate why workforce development matters. A recent report issued by the Organization for Economic Cooperation and Development (OECD) shows that Americans lag far behind their counterparts in other developed nations in the mathematical and technical skills that increasingly define the modern workplace. Around 166, 000 adults aged 16-65 were surveyed to determine proficiency in information processing, literacy, numeracy and problem solving skills in technology-rich environments. 24 countries and sub-national regions participated in the survey: Australia, Austria, Belgium (Flanders), Canada, the Czech Republic, Denmark, Estonia, Finland, France, Germany, Ireland, Italy, Japan, Korea, the Netherlands, Norway, Poland, the Slovak Republic, Spain, Sweden, the United Kingdom (England and Northern Ireland), and the United States, Turkey (Cyprus) and the Russian Federation. Below is a graphic from the New York Times that shows where the US landed in a few key areas: 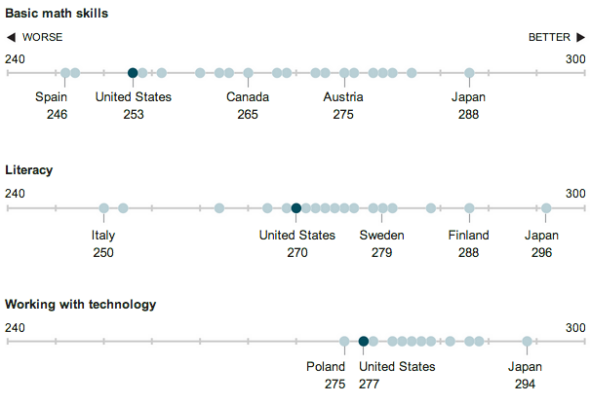 As indicated, the United States ranks near the middle in literacy and near the bottom in skills with numbers and technology. In number skills, just 9 percent of Americans scored in the top two of five proficiency levels, compared with a 23-country average of 12 percent, and 19 percent in Finland, Japan and Sweden. If we look to the future, the US is lowest in numeracy among all participating countries when comparing proficiency among 16-24  year-olds.

In addition to our relatively poor showing, the results also indicate that:
•    Skills transform lives and drive economies
•    Low-skilled individuals are increasingly likely to be left behind.
•    Countries (not just individuals) with lower levels of skills risk losing in competitiveness as the world economy becomes more dependent on skills.
•    Inequality in skills is associated with inequality in income.

While the survey was nationally focused, the numbers are likely very similar here at home. As such, continuing to work together to rally and support investments, programs and services to improve the skills of our workforce is essential to transforming lives and driving our economy.

A full copy of the report is available at http://skills.oecd.org/skillsoutlook.html