Every year, our partners help more than 85,000 people improve their skills, find jobs or advance in their careers.

Get news & information on Workforce Development // Sign me up 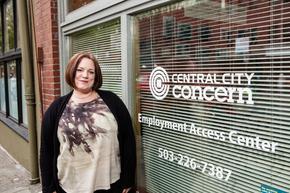 The Economic Opportunity Program is a partnership between Worksystems, Prosper Portland and nine area community based organizations that provides training, employment and intensive support services tailored to meet the needs of highly barriered populations. Through our partnership with Central City Concern, we helped Amy get back on her feet.

“I started drinking and smoking pot when I was fourteen,” says Portlander Amy Simpson. For twenty-five years, I used marijuana and alcohol. I drank a lot. Toward the end, I became addicted to meth amphetamine. I led a dual life. I was good at deception. I held jobs. I functioned—at least during the day. At night, life became an increasing mess. Finally, I lost my job and my apartment, and I ended up in jail.”

In the summer of 2011, Amy entered DePaul Treatment Center in downtown Portland. That’s where she heard about Central City Concern. “Central City Concern had housing options,” Amy says. “They had a mentor program and an employment-readiness program for people like me coming out of treatment. With their help, and with the help of my family, I got a studio apartment downtown in a ‘clean and sober’ building, and I became part of the Central City network.

“My supportive, gentle, patient, inspiring case worker spent a lot of time with me. I was fragile. He listened and helped me figure out what I wanted to do with my life. He helped me get my driver’s license back and helped me apply for a training scholarship through WorkSource Portland Metro. He also put me in touch with an employment specialist who knew all about WorkSource. She was a lightning bolt of direction and connection! With her assistance and WorkSource resources, I was able to earn an Alcohol & Drug training certificate at Portland Community College. “I then landed an internship at Old Town Recovery Center, and then, I got my current job as a Subacute Technician with the Hooper Detox Center, a Central City Concern program for people with addictions.

I love Central City Concern, and I love working for them. Amy goes on: “Three years ago, I thought I was going to die a drug addict. I was full of desperation and despair. Today, I have a chance to tell others, ‘Hey, I get it. You’re scared. I felt that way. Look at me now.’ This has all been the realization of a dream.”