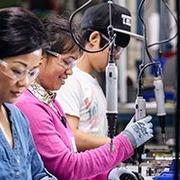 COVID-19 and the subsequent economic shutdown have resulted in unprecedented jobs loss and financial hardship. Many gainfully employed Oregon residents who are immigrants (and contribute to our collective prosperity) have lost their jobs because of the pandemic and have no access to any financial assistance program such as the federal Unemployment Insurance program. Undocumented immigrants are categorically excluded from some of our most important federal safety net programs such as SNAP and TANF, in addition to the $1,200 Economic Impact Payment and the Earned Income Tax Credit. This has immediate harsh impacts, such as homelessness and food insecurity, and long-term impacts undermining the health and stability of immigrant families.

The COVID-19 pandemic is unearthing long standing inequities and deep structural issues with policies and practices that systematically disenfranchise and exclude our friends, family, neighbors, and coworkers because of where they were born. The current system fails to recognize and support some of the region’s essential workers and the role they play in the local, regional, and state economy.

How large is the population?

New data from the Oregon Employment Department show the devastating impact COVID-19 is having on the labor market. The sector hardest hit is Accommodations and Food Services. The sector employs more than 9 percent of all workers in Oregon but represents 22 percent of all initial unemployment claims since the beginning of the economic shutdown. During that period, initial claims were processed for more than 72,955 Accommodations and Food Service workers in Oregon. This represents 38 percent of the 2019 workforce.

These numbers likely represent a fraction of the workers who have been laid off. Faced with unprecedented demand, the unemployment insurance system currently has a backlog of claims. We will likely see more layoffs during the coming weeks and months.